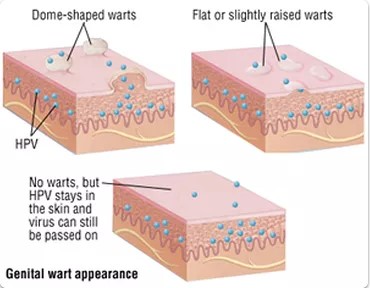 A wart is a small, rough growth resembling a cauliflower. It typically occurs on humans’ hands or feet but often in other locations (face, arms, legs, genital). Warts are caused by a viral infection, specifically by one of the many types of human papillomavirus (HPV). There are as many as 10 varieties of warts, the most common considered to be mostly harmless. It is possible to get warts from others; they are contagious and usually enter the body in an area of broken skin.

Common wart (Verruca vulgaris), a raised wart with roughened surface, most common on hands, but can grow anywhere on the body.

Flat wart (Verruca plana), a small, smooth flattened wart, flesh-coloured, which can occur in large numbers; most common on the face, neck, hands, wrists and knees.

Filiform or digitate wart, a thread- or finger-like wart, most common on the face, especially near the eyelids and lips.

Mosaic wart, a group of tightly clustered plantar-type warts, commonly on the hands or soles of the feet.

Periungual wart, a cauliflower-like cluster of warts that occurs around the nails.

Plantar wart (verruca, Verruca plantaris), a hard sometimes-painful lump, often with multiple black specks in the center; usually only found on pressure points on the soles of the feet.

Imiquimod, a topical cream that helps the body’s immune system fight the wart virus by encouraging interferon production. Approved by the U.S. Food and Drug Administration (FDA) for genital warts.

Fluorouracil, which inhibits DNA synthesis, is being used as an experimental treatment. It is applied directly to the wart (especially plantar warts) and covered (for example: with tape).

Cryosurgery, which involves freezing the wart (generally with liquid nitrogen), creating a blister between the wart and the skin after which the wart and the surrounding dead skin supposedly fall off by themselves. An average of 3 to 4 treatments are required for warts on thin skin. Warts on calloused skin like plantar warts might take dozens or more treatments.

Laser treatment (Nd:YAG Laser): it works by selective absorption by water molecules then vaporizing and destroying viral tissue. It takes 1 to 3 treatments according to the size and severity but can be many more for extreme cases. Typically, 10–14 days are required between treatments. Preventative measures are important.